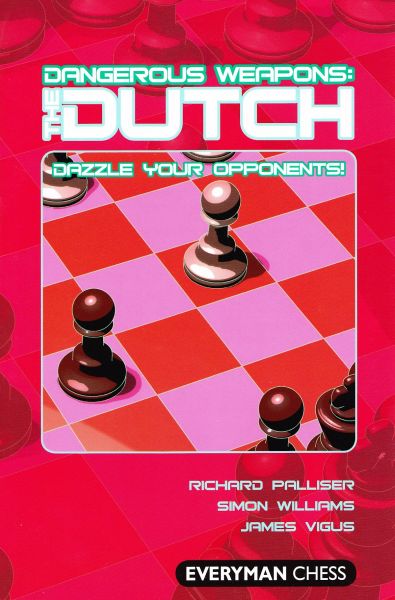 Beschreibung Bewertungen 0
Beschreibung
Dangerous Weapons is a series of opening books which supply the reader with an abundance of... mehr
Menü schließen
Produktinformationen "Schachbuch The Dutch"

Dangerous Weapons is a series of opening books which supply the reader with an abundance of hard-hitting ideas to revitalize his or her repertoire.

In this book, three opening experts take a revolutionary look at the Dutch Defence, one of Black's most ambitious answers to 1 d4. Instead of analysing the well-trodden main lines they concentrate on fresh or little-explored variations, selecting a wealth of 'dangerous' options for both colours. Whether playing White or Black, a study of this book will leave you confident and fully-armed, and your opponents running for cover!

The Dutch is one of Black's most dynamic defences to 1 d4, and lends itself rather well to early creativity. Hence it supplies plenty of good material for the Dangerous Weapons player, no matter which side of the board they are on.

In terms of the main line Dutch, Black has three popular methods: the solid and fairly easy-to-handle Stonewall, which we don't touch upon; the long underrated Classical variation, with which we present both a new wrinkle and up-to-date cov­erage of Black's best option; and the Leningrad where the so-called Christmas Tree variation has been causing White no end of problems of late.

This has been a very enjoyable project to edit, and I've been most impressed by the discoveries of both of my co-authors. In terms of who wrote what, Leningrad guru James Vigus supplied chapters 7 and 8; Simon Williams covered the aggressive ideas which one will find in all of chapters 1, 4, 5,10 and 11; and I penned the rest (chapters 2, 3, 6, 9 and 12). Finally, some further thanks are due to both Norman Stephenson and David Vigorito for their invaluable help with this work.