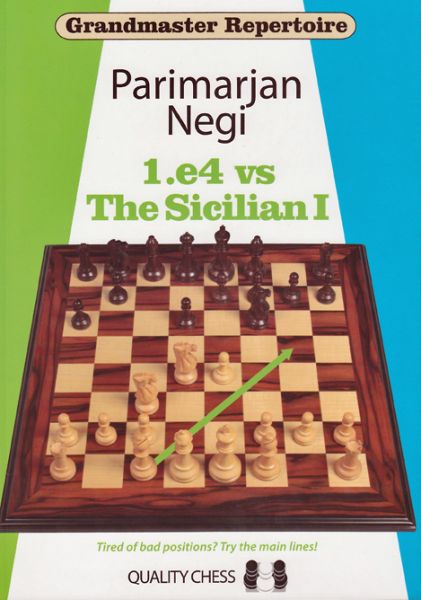 Schachbuch Grandmaster Repertoire - 1.e4 vs The Sicilian I

Ever since its inception in 2008, the Grandmaster Repertoire series has produced some of the world’s best opening books, but an elite repertoire with 1.e4 has always been missing – until now.

In this, the second volume of the Grandmaster Repertoire – 1.e4 series, Indian superstar Parimarjan Negi tackles the fearsome Sicilian Najdorf, presenting his own world-class repertoire with 6.Bg5. Building on a foundation of tried-and-tested main lines, the author unveils a wealth of new ideas against the Poisoned Pawn and other critical variations, making this an essential addition to the library of every ambitious player.

Parimarjan Negi is a former child prodigy who is the second-youngest player of all time to obtain the Grandmaster title. He was Asian Champion in 2012, and played on Board 1 for the Indian team which won bronze medals at the Tromsø 2014 Olympiad.

"Negi's book is absolutely stunning. My jaw kept dropping at the attacking ideas that Negi exposes in this book. Just as in his previous book on the Caro-Kann & French, there is that beautiful mix of computer analysis, database research (including correspondence games) and superb insight that makes it a real learning experience as well as a super-GM repertory."

"The younger generation tends to depend more on the computer. At the level they are now, why not add another dimension by reading more, I try to say, at least when you have great authors like Parimarjan Negi. His books on the Sicilian are absolutely fabulous."

"There seem to be so many new ideas it's an absolute must for high-level players who are willing to get involved in tussles involving 6.Bg5. The fact that the author also takes the time to explain the reasoning and the logic, even in sharp, almost irrational positions, is most helpful."

"These days with stronger and stronger engines one might question the need for opening books, but this would be a mistake. While the strongest engines are analytical monsters they often work better with a strong guide, especially in the unbalanced positions that abound in the 6.Bg5 Najdorf. Negi is an excellent guide.

1.e4 vs. the Sicilian 1 is the perfect book for the ambitious 1.e4 player who is aiming for the maximum."

"A fantastic book. This is the second entry in GM Parimarjan Negi’s 1.e4 series, the first of which (1.e4 vs The French, Caro-Kann and Philidor) deservedly won the 2014 ChessPub.com Book of the Year award. In his new book Negi turns 6.Bg5 into a fearsome weapon against the Najdorf suitable even for his Grandmaster readers. This is a serious book for advanced players, one that will drive the theoretical discussion on the Najdorf for the foreseeable future."